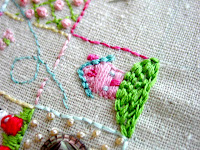 Do you want to do another stitchalong?

I've gotten a few emails and comments asking what's next and I have a few ideas.

idea no. 1: Do a passalong stitchalong where we'll each do an inch square on a grid and then mail it to the next person. We'd have to move it around rather quickly and I'd have to require that you only participate if you knew that you could turn it around super quickly. But I think it would be fun for all of us to work on the same cloth. We could either donate the finished piece to a worthy cause or do a giveaway for it.

idea no. 2: We could do another grid-sampler for counting our blessings. Each square would be something representing a blessing in our life. I imagine that the stitching would help us keep our lives in perspective and appreciate what we have.

idea no. 3: This might not be everyone's cup of tea but I think it would be powerful and personal. Similar to idea no. 2, we could do a prayerful sampler. Each square would represent a prayer. We would pray as we stitch, thinking deeply of what prayer the square represents and then when we post the square we also post an accompanying prayer.

idea no 4: Stitching swap. We could stitch something useful, like pillowcases, napkins, tea towels, and swap them. And maybe to make it even more special, instead of sending the gift to one another, we could think of someone in our lives who could use a pick-me-up and have it sent to them instead. So if Mary and Jane were partners, maybe Mary requests that Jane send the gift to Mary's cousin who just had surgery and maybe Jane requests that Mary send the gift to Jane's friend who's feeling blue.

So I'm putting it up for a vote...look below for the poll and vote for which you think would be the most fun. You don't have to commit to participating...this is just to let me know which idea we should go with. Sign up will be later.
love, amy at 10:27 AM

Amy,
Hooray! I'm so excited to see this post! I admit that I've been having huge withdrawal problems since the stitchalong ended. Thank you so much for this; I think all of the ideas are fabulous. Can't wait to get stitching!
Alison

Amy, I love all your ideas, I felt like I missed out last time so I am going to be in this time!!!
Hugs,
Margaret B

I wanted to do another one of these as it was such fun and worked up quickly. I voted for No. 2 but No. 3 is great too.

Amy,
i missed the first one so I voted for a second. I want to be sure and get involved in this one. I voted for number 2 also. It just hit me as perfect but I also liked number three, as I have a prayer shawl that someone prayerfully made for me. I am a little concerned about swaps as this is a busy time of year and I have a jewelry show coming soon...but I would probably do any of them! I want to improve my very casual stitching!!!
Hugs,
Suz

Love this idea Amy! I'm going to join in regardless of the vote! Another idea I had (for next time...hmmm...there could even be a book idea for you if this trend continued!) was to do a seasonal sampler that we switched out every quarter. xo corinne

I did the stitchalong and had a blast. I see I'm not on the blog roll anymore? maryjanes and galoshes? Anyway, I started a second one on my own just because I was having so much fun so I'm excited to see what you do here.

Amy I'd love it..whatever you decide I want to do it. I saw several of the 39 samplers that were goign around blog land and loved them! I like the blessings idea...I think everyone could do something with this...or maybe you should make a list of ten ideas and then let everyone create their own sampler using your ideas! Or...give an idea each week and have us stitch 5 to 10 blocks using a variety of your idea (floral, color, bird theme, kid theme, home theme,spiritual...etc) I'm game for whatever direction you want to go!
Blessings,
Debbie

Oh yay, this is great to hear! I'm a total beginner and would find a stitch-along helpful to start things up...that's why I voted for idea no. 2 as well... can't wait... :)

Yay!!! I'm so happy to have the chance to do another sampler:) (Withdrawals, you know:) I love one of the other comments above about doing seasonal samplers. My last one focused on Easter and Spring. It would be cool to end up with all 4 seasons of samplers, framed and displayed in a grouping. I did vote for the blessings one though;)

I was inspired by the 39 Squares stitchalong. Although I couldn't participate at the time, I've been thinking of doing a little sampler on my own. I like the seasonal idea (most of my thoughts for what to stitch are nature- or season- related), but I voted for counting our blessings. It's pretty much the same for me! :)

I missed the first stitch-a-long or should I say I stalked everyone elses grids and they were all amazing. I woudln't mind doing something like that again but have one place we could all post instead of hopping around and looking for people who stitched. But whaever we vote on will be good for me.
Thanks

They're all great ideas, personally, I like idea no. 3. My mind tends to wander into prayer when I'm doing quiet things like stitching anyway.

They all sound great and I really enjoyed the last stitchalong so I'm really up for whatever you go with!

This is so exciting. I can hardly wait!

I love the prayer idea and would love to co-host if needed!!! Great ideas!

I like all the ideas. But, since a friend of ours just lost her mother and husband plus her grandson was in an accident, I figure there are other people out there who could use a pick-me-up, too. So, I vote for #4.
Great ideas!
Mary @ Vintage Comfort

I can't read the blog--is it only me? The background is dark gray or brown and the type looks orange, maybe? The comments link is pink, though, and I could see it fine.

Amy...I love all of the ideas and would like to participate...I am still working on my 60 squares...
I did two inch squares that signify events in my life as I will trun 60 in July.
I am on square 29 and will post pics soon.

I'd love to do a stitch along but am in the process of moving from Texas to Michigan, so I guess I'll have to pass on this one. However, I will follow your blog to see if another opportunity arises after I'm settled.

I missed the first one so I vote for no. 2
Alison

I've only just discovered your blog and I'm LOVING the last stitch along you did. Have you already started the second? If so, can I be in the third??