Rich had lots of paper work to do this weekend so I decided to skip town with Alfredo for the weekend to give him some space and time. We headed out early Friday morning for my parents' house.

My parents live in a very small town...there are only two stoplights and sometimes the most exciting thing to do in the town is watch them change color.

My mother said she had tickets for a performance on Saturday night and she had talked to Daddy and they decided that I should go with Momma and he would stay with Alfredo. "What kind of show is it?" I asked my mother. "Four guys singing together" and then she showed me the advertisement... 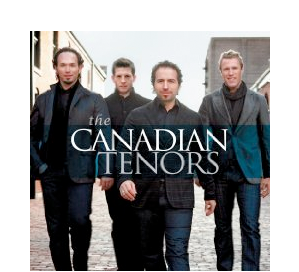 I couldn't believe my eyes! These guys are world famous...and were coming to my rinky-dink hometown to sing?!! They were just on Oprah, for heaven's sake!

The concert was absolutely amazing. After intermission, Seth (who had a front row, center seat) traded seats with me. He said he was trading with me because he wanted one of them to kiss me. I teased him after show with an elaborate story about how one of them begged me to marry him but I had to tell him that I was already hitched. He believed me and I had a time convincing him that I was just kidding.

My little town gave these guys a standing ovation that demanded an encore. A few people, including me, shouted out "Hallelujah!" hoping that's what they'd sing next and they joked that it sounded like they were in church with all the Hallelujah shouts.

I had two favorite songs, besides the encore..."O, Sole Mio" was sung solo by Victor Micallef...it was absolutely amazing. It made me feel guilty though for taking my father's place. He would have really loved hearing that song especially. And when they sang "The Prayer" tears sprung to my eyes...so powerful!

It was such a nice evening and so different from what first came to my mind when my mother said "four guys singing together"...I thought it was going to be a barbershop quartet! The Canadian Tenors? Unbelievable. Go see them if they come visit your town...you must!
love, amy at 9:11 AM

WOW! I just saw them on Oprah also and wrote down their name. I had goose bumps while watching them. Lucky you! Glad you enjoyed them.

Just checked them out - they are amazing!! I'm glad you and your mom got to share a special evening.

How awesome! What a great evening!

Too exciting! Happy for you...

oh amy...i can just hear your sweet mother saying, "four guys singing together"!!! how cute!! so glad you had a wonderful time!!

What a great story. I hope you had one of those memorable nights that you will remember forever.

How wonderful for your town to be able to have this level of arts entertainment! YAY to whomever organized it.

I am missing your links to blogs on your right column.

Oh what a wonderful thing to share with your Mother. Your Dad would have loved having the one on one time with Alfredo
Alison

You gotta love your Daddy. They never stop putting us first {thank goodness!}.

Well, you came from a little old town, too, Amy. We used to be so excited for Corn Palace Week when Lawrence Welk would come. Then there was the year he brought Barbara and Bobby and the best year, when he brought The Lennon Sisters!

I need to go to Netflix and check out The Canadian Tenors. I love male quartets...sounds like this is right up my alley!

yipee for Canada (I am in Saskatoon, SK-Canada)-if you like those guys you should hear me sing itsy bitsy!
I'm off to utube them right now!

We saw them when they came through here several years ago opening for Michael Buble - also one of our favourite Canadian Boys! Lurrve. Can't wait for this summers' concert, we already have our tickets!

Just downloaded the whole CD...love it but it is such a tearjerker. Seriously, I love music that makes me cry!

Dont cha' just love 'em!? I met them before they made it big- here in Toronto. I freaked when I saw Celine join them on Oprah!

they are amazing. you deserve a night out! xo

Hey how exciting! This is wonderful...good for you. I would love to see them and love their sound! Wowwooow! I'm sure having fun with your stitchalong blog and getting to visit everyone! It is great.
Have a blessed week.
Debbie

You're so lucky! I watched them on our morning tv show right after they were on Oprah, and they were so cute :)

HI AMy! I didnt know the name of your blog and kept meaning to ask someone.. kept forgetting and duh! tonight I finally thought of googling it! and now I've found you! How lucky you were to go see them! I wonder how they ended up in a small town. did you ever find out?
35 days til our trip! cant wait to meet you in person. Now that I found your blog I have to mark it so i dont lose it again!
hugs!
vivian