All of these spooky snacks can be found at Kraft Foods.com. Don't they inspire you to make something fun and special, not to mention ooey and gooey?
love, amy at 8:16 AM 8 comments:

Can you believe it? NeSts...gone! Lucky Charm Bracelets...gone! The good news is that Deb is going to try to make me another batch of autumn NeSts. And Melissa is already working on more Lucky Charm bracelets. Yay!

Thank you everyone for making my evening so much fun with the flurry of orders. I love each and every one of you.

p.s. I love Oprah & Friends on XM...but I have to say that it is not meant to be listened to 24/7. There is an incredible amount of repeated programming. For instance this morning's Dr. Oz show is repeated from Monday's. And the same show, I think, will be repeated another 2 or 3 times today.

My second favorite channel is number 4 on the dial...the '40s channel. I know almost all of the songs, believe it or not. And it always gives me a thrill to hear Doris Day on the radio...that would never happen on regular radio.
love, amy at 7:22 AM 5 comments:

an aroma that embodies modern freshness as its vibrant fusion of sweet peaches and honeysuckle intermingles with a lush spring garden of fragrant floral petals.
love, amy at 8:34 PM No comments:

So Sweet! Fleece scarf all curled up and pretending to be a cupcake!

Melissa sent me five of these fantastic Trick or Treat charm bracelets! Aren't they wonderful? They are each a little different.

She also sent this autumn-inspired one...

The Cottage's first anniversary celebration is the weekend of October 6-9. I can hardly believe that it's been a year since that blustery day when I met (and fell in love with) the Cottage, Linda, and Ann. You are all invited to the first anniversary party. My friend Debbie will be there showcasing some of her autumnal decorations. And The Cottage will be chockfull of fabulous things.

Today, I worked hard all day sprucing up my room for the celebration...Want to see?

I think I know the answer...

Tomorrow, I have LOTS of new things to add to the store...including, my friends, NeSts from Deb and Halloween charm bracelets from Melissa! Oh, and a brand new scent from Shelley Kyle. And a few more wonderful things...just you wait!
love, amy at 9:21 PM 21 comments:

I love Oprah. Have I told you that? So when she announced months ago that she is launching her very own radio channel on XM, I knew right then that I really must have XM Radio.

As a side note, my sweet friends, you should note that Rich is adamantly against having to pay for radio programming. He says all the time how ridiculous it is. And, until now, I've kind of agreed with him. $12 a month indeed adds up. And is it really worth almost $150 a year to listen to the radio? How ever wonderful it is?

It has been eating at me for months now. I needed to hear this radio programming, especially the broadcast of Gayle and Oprah's telephone conversations. That was my proverbial dangling carrot.

I even thought about just going out and getting it. I couldn't do it. While I certainly don't have to clear every purchase with Rich, he is so vocally and stubbornly against paying for radio.

I tried to be creative in ways to get XM without really getting it...The Cottage has it. I asked if they would loan it to me for a little while. But it's not that easy. It's a lot of wires and bits and pieces...more complicated than I thought.

Plan B? My friend told me that you can get a "boom box" where you can just plug in the receiver and make it portable. I thought maybe I could just buy the boom box and use The Cottage's receiver. This, too, is a little bit complicated since I would have to make sure I got the right kind of boom box for their receiver. I'm not good at this sort of purchase.

Plan C? Could I hear Oprah's channel online? Last night, in a sort of panic, I was searching XM's website to find out. I signed up for the free online trial but it didn't seem to be on the line-up. I called their hotline and was on hold for a full hour. Finally I got a person on the line, only to find out that this person knew only what he could read in the little manual and, quite unfortunately, this fellow was not at all a fast reader. And there was something about his lack of confidence in his answer that fed my frenzy.

So after witnessing all of this creative-problem-solving-met-with-brick-walls, Rich turned to me from his reclined, television-watching-position and said (with a little scowl) "Put your shoes on." Off we went to Circuit City. And today, I am a very proud (if a little guilty) XM radio listener. Oprah's channel premiers in just a few short hours. I'm as happy as Christmas.
love, amy at 8:13 AM 13 comments: 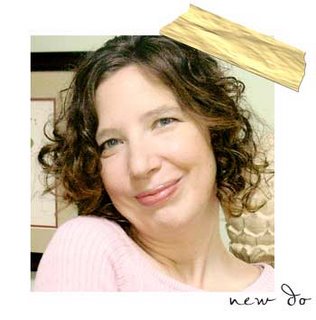 What you can't see in this picture is that my hair is short everywhere else. I'm still getting used to it...it makes my head much smaller, without all the bulk of my hair around my crown.

I don't have a picture to show you and I know you'll want one. I got my hair cut today. It is a bit on the edgy side. I had to swing by Debbie's house afterwards just to make sure it wasn't too "out there". She said that it is definitely creative and artsy...but most of all "hot". That's also what Dusan kept saying as he was cutting it. Rich says he likes it and that it's different. I know he doesn't love it but that's okay too. Just so he doesn't hate it, you know?
love, amy at 6:36 PM 11 comments:

My sweet and oh-so-talented friend Deb handcreated these fabulous Autumn NeSts for me. Stay tuned. They'll be available soon at Inspire Company for $19.50 each.

They make the most delightful gift. I should know since I went absolutely ga-ga for it when she sent me one earlier this summer!
love, amy at 1:27 PM 9 comments:

The Coat Challenge, as Alicia posted on her blog, is on. I hurried home from the Cottage to show you some of mine...

I love coats and I've missed mine all summer. This one is a fun one to wear. It's so swingy! I bought it years ago at an after-Christmas sale.

I got this cape last year. It's handmade and, while I do love it, I don't find it particularly wearable. I feel like I'm hiding under a tent. And it cost me small fortune. No kidding.

I just bought this one last Thursday. Nordstrom Rack for $35! I love the buttons most of all. The funny thing is that I bought the very same jacket for my sister for Christmas last year and paid full price.

I bought this last year. You'll never guess where...Target! It was really cheap. When I put it on the first time, Rich fell on the floor laughing. He thought I was joking. When I can muster enough nerve, I do wear it. And I ignore Rich's snickering.

As long as we're confessing things like coat obsessions, I'll make another confession. I am a recovering QVC-addict. It all started very innocently. Rich called one day, and in the middle of channel-changing, I had on QVC. He could hear it in the background and said that it sounded like a real office. Hmmm. I like the idea of sounding like a real office. Next thing you know, it's on all the time and I'm buying things like crazy. (I'm a really easy sell...don't even get me started on me and infomercials!) This coat was a TSV (today's special value) a couple of years ago. It really is nice and people ask me all the time if it is vintage.

My godmother, Aunt Martha, who is about 4 feet tall, routinely gives my mother bagloads of clothes to give to me (5'9"). She once gave me a trash bag full of lacy slips and underwear from the 1950s and 60s, including a pair of sheer panties with a poodle embroidered on it. I'm not making this up.
This coat was in a bag of moth-ball smelling suits. I sent everything else to Goodwill, but I like this coat (minus the fur! which sheds like nobody's business!) Maybe this year I'll find a way to clip off the fur.

I saved the best for last. This is my all-time, hands-down favorite coat. I bought it from Anthropologie a couple of seasons ago. I saw it when shopping with my friend Debbie. It went something like this: "Oh Amy! You have to try this on...it is so YOU!" "You think so? Okay" "Oh...My...God! Amy you have GOT to get that coat! It looks so cute on you!" "I don't know. I will think on it." A few weeks go by. I go back to the store and the coat has vanished from the shelves. Gone. Poof. I find it online. It is backordered for a ridiculously long time. So long that I forget completely about it until it shows up one fine day. My life hasn't been the same since. I am completely cute in this coat. Exhibit A
love, amy at 7:24 PM 17 comments:

I saw that one of these shops popped up close to my neighborhood...have you seen these?

Can you tell I'm hungry?