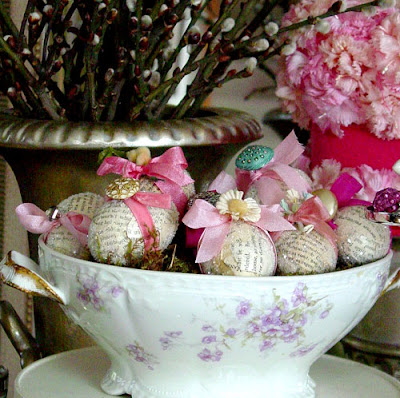 4 years later, and these eggs still get a lot of attention... 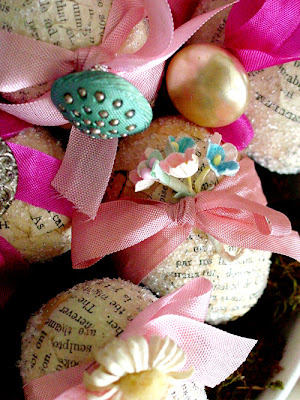 Click here for the original post and how to for these fun surprise eggs, made using plastic eggs! 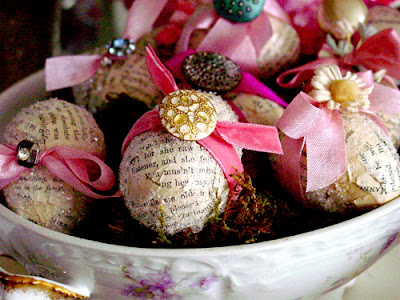 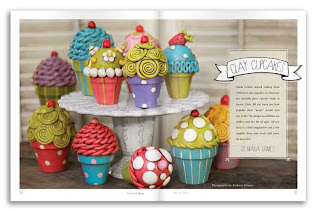 The lovely Maria Grimes is giving away one of her beautiful clay cupcakes, like the ones she made for the Spring issue of inspiredideas! I think I'm going to make a few this weekend...they are just so wonderful, aren't they? And the instructions make them seem incredibly easy. 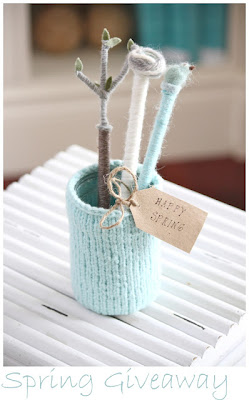 You've just got to head on over to sweet Tracey Fisher's blog...she's giving away a set of the fabulous Springy Pencils that she created for the Spring issue of inspiredideas! Aren't they wonderful? 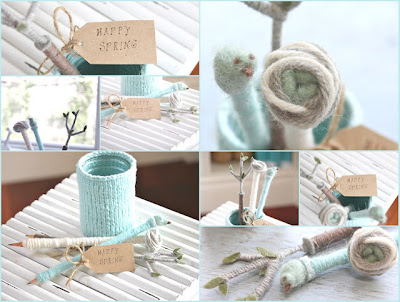 And, hey, if you're not the lucky winner, you can make your own set using the instructions found in the Spring issue. (Wouldn't this be a great teacher gift?!)

I have wanted to paint this wall with black chalk paint forever... 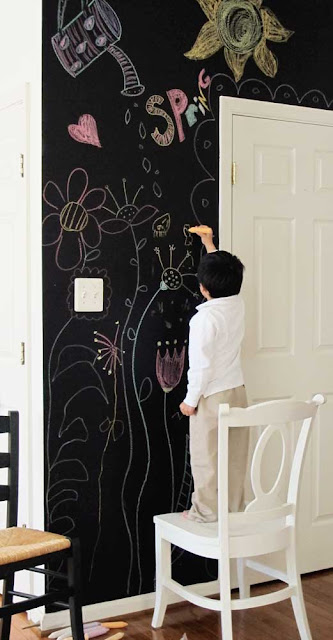 Maybe it's because last week was my birthday...

Maybe it's because Rich is such a sweetheart...

But I finally got my wish!

And Alfredo and I are having the best time drawing a spring flower garden, inspired by the printable doodle Pam made for the Spring issue of Inspired Ideas... 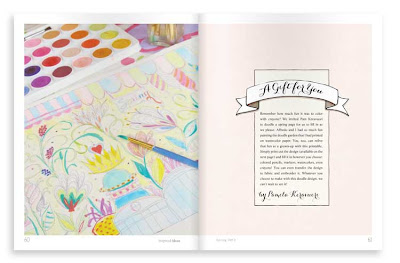 Spring in print...and for ipad!

We were in Joann's last week when I spotted this fabulous shiny fabric labelled for dancewear/swimwear. Forget that...we knew instantly, it would make a fabulous super hero cape! 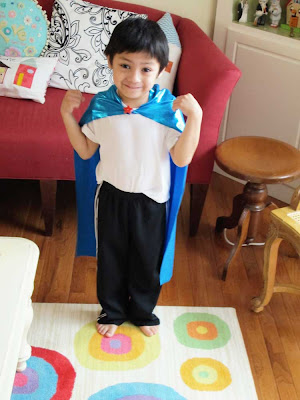 The fabric doesn't fray so I just cut as evenly as possible when you have a 5-year old helping. I just kept it a rectangle for simplicity's sake. On one top corner, I sewed a star button. In the other corner, a loop of elastic. I thought about putting a magnet or velcro closure, for safety, but I decided this arrangement is fine, between the elasticiy of the cape and the button loop. 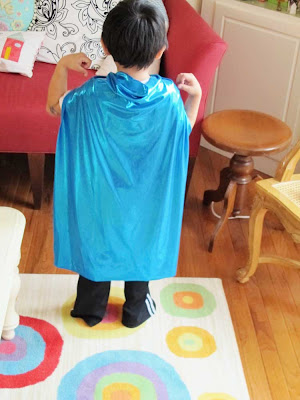 I told Alfredo that we could make some for all his friends that he runs around with (literally) after school. ﻿(For about 30 minutes after school lets out, on nice days, a bunch of friends race and chase and hoot and holler around the churchyard) But my very nice little boy said what he would really like is if I could make a cape for each of his classmates. So nice! So yesterday, that's exactly what we did. It only took a couple of hours. We made them in red, blue, and gold. The gold ones were backed in black so they looked extra cool. 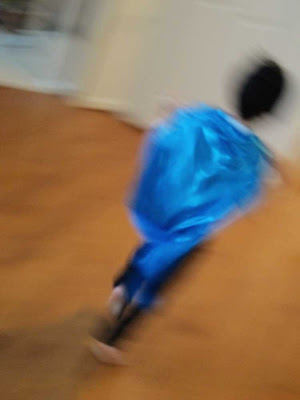 He took them in this morning and he is so excited to share them. He's going to give them to his teacher and she'll decide how/when to distribute them. I sure hope they like them.

p.s. I asked the teacher about the closure and she said that she'd make sure they were closely supervised. If I were making these for a younger set, I would definitely use velcro or a magnet.
love, amy at 9:21 AM 4 comments:

more from the spring issue... 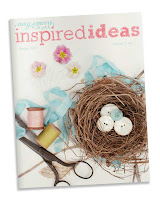 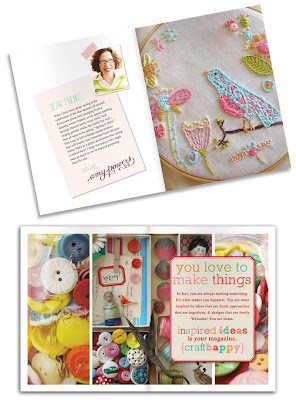 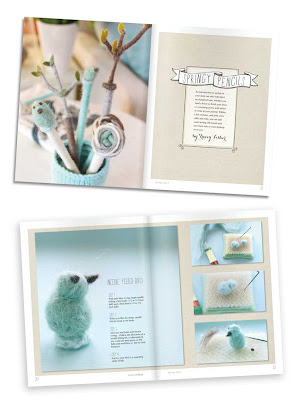 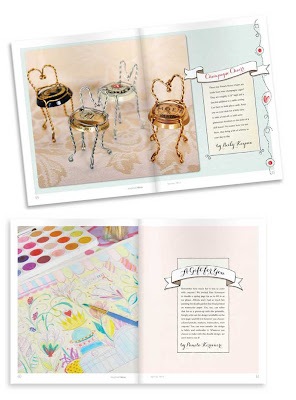 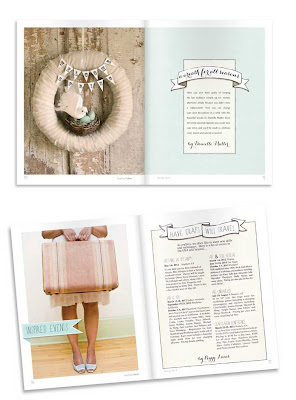 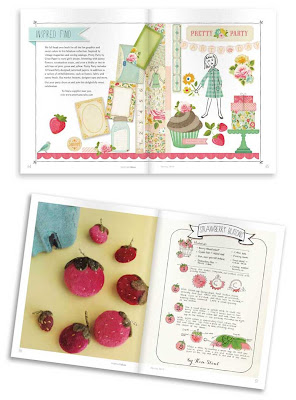 I'm so proud of this Spring issue...it's my favorite of all the issues we've published so far!

I want to thank all of the contributors for all the love and care they put into their projects. I couldn't have done this without you. And I want to especially thank Kerrie More for her excellent proofreading, Pam Keravuori for her fabulous doodles, including the fun title banners and printable, and my sweet friend Lorraine for cheering me on. 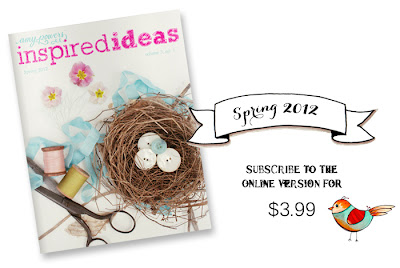 Are you ready to get your craft on?
I think this is the best issue yet
(but then again, don't I always say that?) 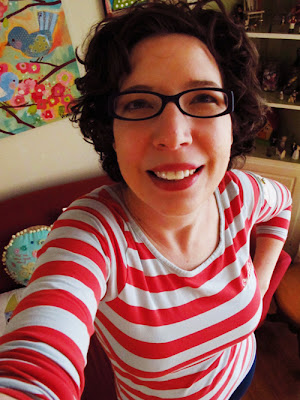 Happy birthday to me!

You know how much I love celebrating my birthday, right? Well, Alfredo and my friend Lorraine (whom he calls Aunt Tootsie) did some plotting and have arranged a wonderful birthday afternoon. It was the cutest phone conversation ever...I wish I'd somehow managed to record it.

I will, however, bring my camera to record the day's events.

Did you see Susan Branch's delightful kitchen garden, complete with instructions on how to build your own? 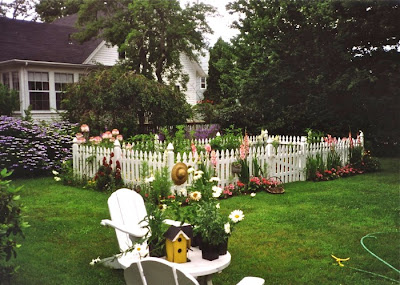 Oh, it's so adorable...you've got to head on over and check it out. It makes me want one more than anything.
love, amy at 2:30 PM 4 comments:

So, the whole guest blogging thing was kind of a bust. So I thought I might show you some stuff...

Maybe you already know this but my friend Claudine Hellmuth has some really cool kits over at HSN. I bought them all and I love them so much. The packaging is amazing and there is so much stuff, I can't get over it. 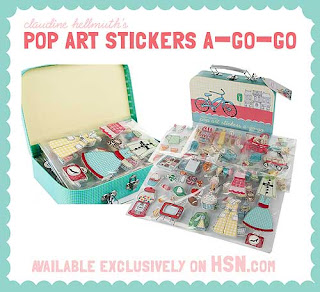 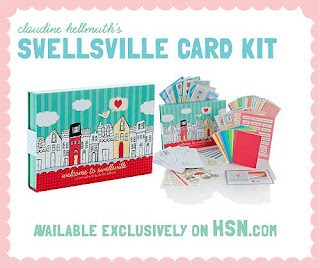 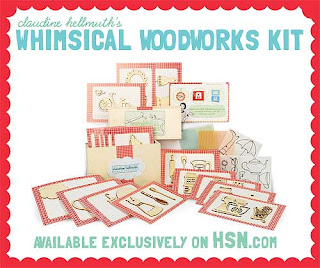 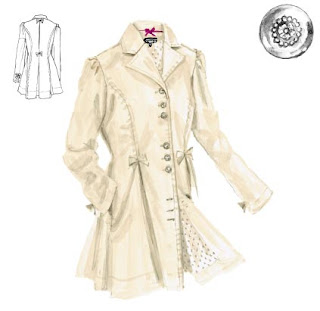 The short answer is...crazy busy. And on top of busy...poor Alfredo has the flu! How anyone can be so pitiful yet so adorable at the same time is impossible to know but I think he's going to be sick for a while. Just now he said "My head feels like a bag of pudding"....see what I mean? Pitiful yet adorable. And this morning when he threw up all over the sofa, the first thing he said was "I'm sorry I ruined your nice sofa with all my throw up"...pitiful and adorable. (and sofa not ruined)

The long answer is a bit harder to cough up. I've sort of gone off blogging. I don't know how or why...I suppose I could wax poetic about it and come up with some valid-sounding reasons. Busy is part of it, for sure.  But I'm always kind of busy (aren't we all?)

So here's what I'm thinking of doing...until I get back up on the blogging wagon (or is it off the wagon?) What if I do a few series of sort of themed guest spots? Wouldn't that be kind of fun? And what if we start it out with collections? Just shoot me an email  {amy (at) inspireco (dot) com} with pretty photos of your wonderful collection(s), information about your collection, etc. and a little bit about yourself. Then, next week, there will be a veritable parade of wonderful blog posts. Another theme announced each week...

p.s. Isn't that the most gorgeous jacket you've ever seen? I'm pining for it for my birthday but it's a bit of a long shot since my husband thinks it's ridiculous to buy clothing from an illustration. It's from J. Peterman, of course. I am a sucker for J. Peterman.
love, amy at 4:21 PM 6 comments: