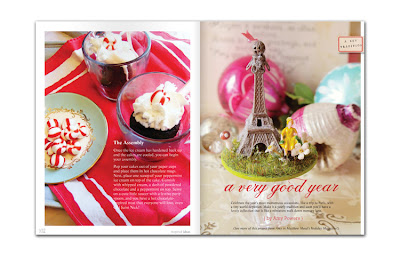 This is one of my favorite spreads from the Christmas issue...it's just so bright and happy, isn't it?

Now that the magazine is published (and I'm waiting for the proof of the print version (coming soon!)), I hardly know what to do with myself. I have lots to do but it's nice to just dawdle a bit, isn't it? We have a playdate today so I really should be straightening up and vacuuming.

We had Alfredo's parent/teacher conference last week and his teachers had such wonderful praise for him. We are just so proud of him. She said that he had a contagious spirit and that all the other children adore him. She also said that she thought he is ready to start with early reader books...so exciting!

He's been talking a lot about what he wants to do when he grows up. His list is growing every day and includes everything from a ninja super hero to a taxi driver, a nature photographer to a garbage collector, a paleontologist to a football star. He's also been planning out his future in terms of a wife and family. He's so serious in these discussions and it's so hard not to laugh. He talks about all the things he'll do with his babies, the games he'll play and the things he'll teach them. I try to match his seriousness but  he's just so adorable!
love, amy at 9:23 AM

I love those conversations.

You are so blessed to have that little boy! Precious times...

So funny about Alfredo wanting to be a garbage collector. At this age, the largest truck my son ever saw was the garbage truck, and that was what he wanted to do. He's since changed his mind many times, from a card shark (seriously), to a spy (seriously) to a polition, to an attorney. Who knows what's next. He's in his second year of college, and I can't believe he's so grown up--well except for the card shark thing. They grow so fast....

Enjoy him while you can.