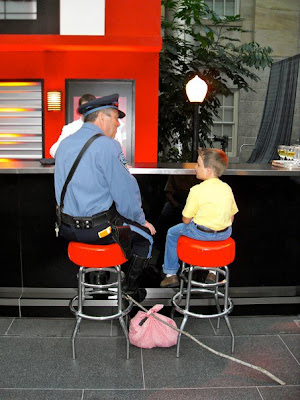 My friend Debbie's son got the chance to do something really fun. There's a new exhibit over at the Smithsonian American Art Museum of paintings from George Lucas' and Steven Spielberg's personal collection of Norman Rockwell paintings. To celebrate the opening last night, a few of the paintings were "brought to life" and my friend's son Evan starred as the runaway in the famous painting of the same name. Isn't that so cool? And look how cute he is!

Here's how the original looks... 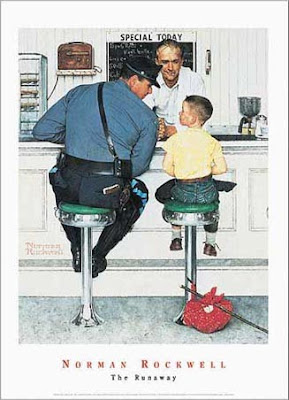 It sounds like it was a really fun night. Spielberg and Lucas were there...and Steven Spielberg even took out his camera phone to shoot Evan's set.

Hope you have a really great holiday weekend. I'll leave you with one more photo, this one of Alfredo in his Little Gym class... 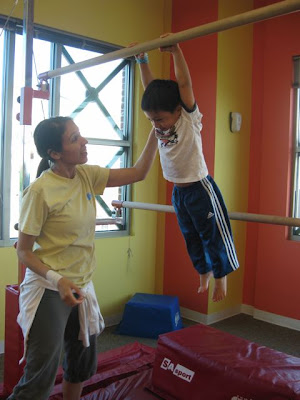 This post made me smile from start to finish! That little boy of yours is tooo cute!

How cool is that!? What an experience!
And as for Alfredo, How adorable! Everybody knows that the moon outranks the stars!

Awww. And he's the SUNshine of your life!

fantastic! I live in DC and go down to the museums about oh, once a week, with my almost-3 year old... We might shake things up and hit this one next! Thanks for spreading the word!

Honey Lamb and I said...

How crazy cool for your friend! You know Speilberg has shared that with lots of people. So cool! They should have offered it so that people could bring their kids in to all have a picture one at a time in that seat. It would be cool to have your kids pic like that!
Your little one looks adorable. So fun to see them succeeding at all types of fun things! :) ~Shelley O.

That's so cool! I just love Rockwell! My Son just started Gymnastics camp today. He likes it but I was told he was hitting the girls! Yikes!

How adorable is that? I'm a Moon at the Little Gym! Love that. So happy to see you so happy with your little guy. ~Lidy