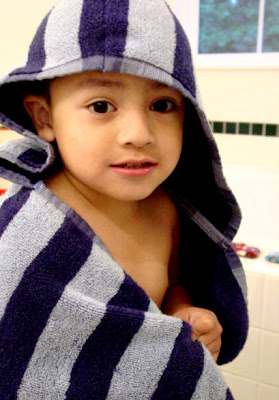 When I saw the hooded towel tutorial over at The DIY Dish, it looked so easy I decided to give it a try. It's a bath towel and half a hand towel. I don't sew but it took me just 15 minutes and I'm just so proud of it. 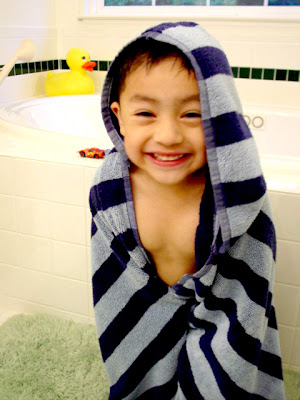 I think I'll embellish the next one...maybe add shark teeth and a fin on the hood.

And I think these would make great gifts for children of all ages. Don't you think? These stripey towels are from Target and are super cheap...Something like $3.50 for the bath towel and $2.50 for the hand towel. Next time, I'll cut the hand towel just a bit smaller than in half since he's so small. 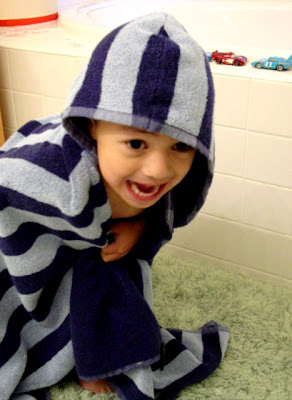 I took these pictures after bathtime last night and he just kept wiggling and giggling. Then he screamed out "I gotta go peeee-peeeeeeeeee!"

I love seeing pictures of Alfredo! I had a hooded towel when I was little. It was white with dog ears and a red tongue. I loved it! Can't wait to see the shark towel!

I got one of these as a baby gift for my daughter. It is THE perfect towel! I'll have to make another one!

The hooded towel is so cute - but Alfredo is even cuter! I wish my baby was younger - I would make one up in a minute!

He's adorable! Hooded towels are so pricey at the stores, thanks for sharing with us the site!

Love those pictures of Alfredo, Amy. He is growing up so quickly!

As a fellow non-sewer (seamstress?), I am impressed!

I laughed out loud at the "PEE!"... I feel that way sometimes, too, Alfredo! Thanks for the giggle.

I laughed out loud at the "PEE!"... I feel that way sometimes, too, Alfredo! Thanks for the giggle.