I just picked up my new specs. Alfredo said "Now you look like Mrs. Powers!" I'm not sure what he meant by that. I think it's because the lady putting the glasses on my face said "Here you are, Mrs. Powers." 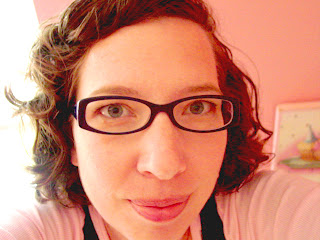 I just found out last night that Alfredo's father, grandparents and uncle (who is only 3!) are coming to visit in just two short weeks. I have so much to do to get ready...first order of business is to get the guest room ready. It is in a sad state presently. Remember way back when I was cleaning, sorting, and stashing and trashing stuff from my craft studio? Well, I used the guest room as a dump. And I never really finished clearing it out. I was telling my friend Lorraine yesterday that there was all sorts of pretty debris left behind there and we decided that "Pretty Debris" would be a great title to a story or a blog.

Anyway, here's to cleaning up messes!

p.s. I should clarify that I really am Mrs. Powers...Amy Powers! It's just that he's never called me that, of course.
love, amy at 1:30 PM

Could they have been referring to
'Austin Powers'??

cute glasses. are they vera bradley? my new glasses are and i love 'em!

He he, what a little monkey, he is sooooo charming, the sweet rascal!!!
Hugs,
Margaret B

your new spectacles are lovely Mrs. Powers. They look a little like mine. I was that way 2 weeks ago, but with 2 babies, it is just easier to stay home and not try to get out and about much. Just going to the grocery was exhausting! I'll be back in Feb. for Max's 1st bday, maybe we can arrange a visit then.
Lovie

Mrs Powers- That's how I clean my craft room, too- stacking it in the guest room. And my secret for cleaning the guest room- putting everything that doesn't belong in the guest room in Rubbermaids in the garage- it might not be a GOOD system, but it works.

That is so cute! He is such a smart little one!

"Pretty Debris" would make a great title. I can see it as a movie...

That's so cool that you have a friend named Lorraine! I do, too! Love you, Mrs. Powers!

Love the glasses! You look cute!!

love the glasses Mrs. Powers! I too have been known to use my guest room as a dump site...hate when I have to clean it up though!

I like Beth's idea. Box up the guest room and stick it somewhere else!

Have fun with the family.

Isn't it fun to pick out new glasses... I just got a stronger perscription and need to go pick out new ones too! The problem is, I can't really see well when I try on the frame samples....Heehe!
Good luck with the guest room cleaning. I have decided to accept the fact that I just move stuff around in a big circle. From bins in the garage - to the specific room - to the just put it here to get it out of the way for the moment room - back in a bin and to the garage again, sheesh! Thank goodness for the once a year community garage sale.
Blessings~LillySue & Holly

I never really made the connection until now, Amy, but you DO possess some pretty darned amazing powers.... so perhaps your 'SuperHero' name actually IS
Mrs. Powers'! ;0)

Those are so cute Amy...they look great on you! That little angel Alfredo says the cutest things...

I just bought the exact same frames in tortoiseshell a few weeks ago after going back and forth about the color. They look awesome on you!