I have a story to tell. Yes, I do have a million things to do (and I know you do too) but this is a good story.

Remember last week, when I took Alfredo to the Christmas Spectacular? Well, I didn't really want to dwell on the bad parts (or even mention them) but now I will. It's important to the story.

First, I wore these beautiful shoes... 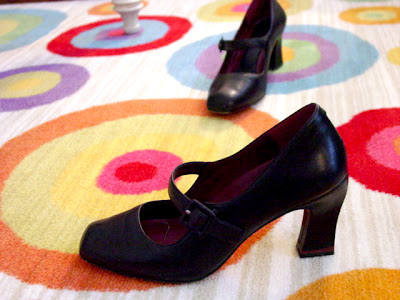 (Important thing to know for later)

The timing of the whole Christmas Spectacular was a little problematic. At 4:00 in the afternoon, it meant waking Alfredo up from his much-needed afternoon nap. Unsuccessfully, I tried to get him down early for the nap. He finally went to sleep just a little while before I would need to wake him up to get ready to go. Reluctant to do so, I pushed it until the last possible moment...waking, dressing, and putting him in the car in record time.

We would have made it on time, perhaps, if a car along the way hadn't stalled, blocking traffic for miles.

But maybe not...there were thousands of cars piling into the parking lot and there were not nearly enough spaces. I finally found a space, looked at the time...4:05! To make matters worse, I had dressed Alfredo in his Santa suit (over his clothes) and his coat didn't fit over it. I hadn't really thought it would be a problem because 1. I didn't realize how very cold it was 2. I didn't know that I'd have to park about a mile from the place.

So, you can see, the whole thing started a little shaky. Picture me, all dressed up, carrying a pint-sized santa, RUNNING to get to the performance.

Then, once we got there, I had the unpleasant discovery that Row X, Seats 6 & 7 were not worth the combined $100 that I paid. Not by a long shot. To make matters worse (didn't I say that already...it's a theme) the lady at the end of Row X refused to let us in. And it was the only way to get to our seats.

Still carrying 30 lb Santa, I climbed up the next few rows to Row Z (the top of the whole stadium!) to two empty seats. We watched happily for 10 minutes until the owners of those fine seats arrived. Booted from the seats we were squatting, and not willing to face the bully on the seat at the end of Row X, I carefully descended the 26 rows of dimly lit and awkward stairs without rails to talk it all over with the first official looking person I could find. I asked said official looking person if we couldn't just please stand right there at the entrance and watch Santa and his reindeer prance around. Please?

Evidently not. It was a fire code violation. Of course it was.

This official looking person offered that I could go to the information booth, halfway around the outside of the performance, to request better seats. Even though the lady there berated me for five minutes about buying cheap seats (???!!!) she offered me what she referred to as better seats.

Having missed a huge chunk of the show arranging these better seats, we arrived at them to find that, while not as far up, they were probably the worst seats in the house. They were flush with the stage. So, while Alfredo could certainly get a good appreciation from this vantage of the high kicks of the beautiful ladies, they were in no way better seats.

When the show ended, I carried little Santa back to the car, spilled the popcorn all over the car, got lost and arrived home exhausted.

And when I looked down at my beautiful shoes, I had managed to lose the bottom part of the heel. 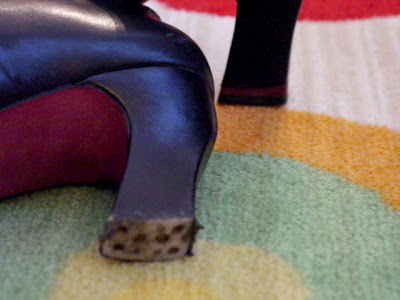 The sad state of my beautiful shoes nearly did me in.

As a whim, I contacted the company, Oh! Shoes, to ask if they might be able to repair my sad shoe.

Here's the best part of the story...and after that story, don't you need it?

And she lived happily ever after.
love, amy at 4:19 PM

Oh! Happy ending! I have an afternoon napper of similar age and know the wait-til-last-second-wake-up-frantic-to-get-there dance, too. Even tougher when you have to deal with the sort of lady who sits in Row X and refuses to let a woman with a child dressed as Santa to their seats. I mean, really.

OK first of all - wow - are you kidding me? the lady sitting in that row wouldn't let you into your seats? Can she even do that? That's ridiculous and talk about Christmas cheer. Am so sorry that the seats were bad; that's no fun. But YAY new shoes! Glad to hear that in the end customer service wins out! Thanks for sharing your story and hopefully you can laugh about this soon!

That is QUITE a story! You're much kinder than I am, I probably would have leaped over the lady at the end of the row who wouldn't let you into your seats (either that, or KICK her lol!) Glad the story had at least somewhat of a happy ending though ;)

I am sorry for giggling...ok, crying....you made MY day..I take care of my mom who has cancer. It has been so stressful..and I so needed this..thank you more then you will EVER realize!
Geneen

ps - coul dyou Oh! So Kindly share where you found those fab jars below a few posts- I have the larger version but neeeed that ity bity one!

Oh Amy.. I love the way you tell stories....I'm laughing out loud at you carrying the pint size Santa! I rarely write much, but today I also wrote a story. Would love to share it with you. Read it if you get a minute to yourself! xo, J

Oh, sweet Amy, you poor dear. I am SO glad your story has a happy ending! (And you know, that seems to be a theme with you... happy endings and happy beginnings!)

I had a miserable day today. Thank you for the reminder that things always get better....

soooo glad you put this story down in writing so years from now you'll be able to look back and maybe get a little chuckle yourself...and the best part of all....it ends with new shoes!!! yay for amy!!!

Well, I'mnot sure tha going through all of that was worth a new pair of shoes that never should have fallen apart in the first place...
but I've seen pics of Alfredo at the performance.
He will talk about this.
When he is old he remember when his Mama took him will to see those high kicking ladies. He won't remember everyhting you went through. He will remember what a wonderful time he had and that will inspire him to do something wonderful for his kids.
Good Job, Mama.

Oh how I love that you got a happily ever after :) what a sad story, but hooray for you for making the best of a difficult day...:)

The Grinch at the end of the row ought to be ashamed of herself! It amazes me how in enjioying a Christmas event the spirit is lost.

Christmas is for children and for her to not take one look at your wee santa and just melt shows that her heart is indeed 2 sizes too small.

May the peace of the season be yours.

I'm with Laura! She needs a mini course in Southern Hospitality! What a wonderful shoe owner to replace your shoes for you- that it a company that I want to business with!

I'm so glad you had a happy ending! That sounds really rough. I have been there!!! And I know all about lugging a 30 lb child because NOodlebug is currently 31 pounds. At 19 months. Sigh.

Your story sounds exactly how my Christmas is shaping up to be. Hoping for a Christmas miracle!

goodness, there are all kinds of people out there, from the grinch in row X to the shoe store owner, but very few as gentle, loving and large-hearted as you, Amy! You exemplify the meaning of Christmas. So glad you are my friend! sending holiday joy and love to you, Alfredo and Rich! xoxo