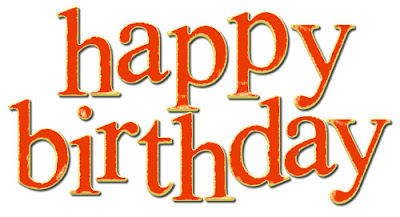 Today is both of my parents' birthday! Will you help me wish them Happy Birthday?
It was on their first date, a double date, that they discovered they shared a birthday. As the story goes, they were parked in front of my mother's house at the end of the date. The other part of the double date was in the front seat. As my mother tells it, my father and she were in the backseat drawing pictures on the steamed up windows. There has never really been a satisfactory explanation, in my opinion, for how the steam appeared but my mother insists it was very innocent. So, as they were drawing such things as JK + MG on the steamy windows of the backseat of the car, my mother casually asks my father about his birthday. When he tells her, she doesn't believe him. She thinks he's found out from someone else when her birthday is and declares it his as well.
As it turns out, it is indeed his birthday. And hers. And, to top it all off, my father's mother's too!
The evening ended abruptly with my mother's parents tapping on the car window insisting that she come into the house at once. How very inappropriate...distasteful...unbecoming to be parked right in front of the house, making steamy windows in a car with a boy she just met!
Happy birthday, Momma and Daddy! Hope your day is full of surprises (and maybe some steamy windows too?!)
love, amy at 7:54 AM

Happy Birthday Amy's momma and daddy! May all your birthday wishes come true! I hope you enjoy many more beautiful shared birthdays to come!

Happy Birthday Wishes to your Momma, and Daddy :) Hope they have a magical day together filled with all they wish for (and forever steamed up windows :) )
crystal 0

What a sweet story! I wish both your parents a merry birthday!

a very happy birthday to your p's, famous amos! you tell a great story!!

What a sweet story! Hmmm... steamy windows??? Blame it on the other couple.

Happy happy birthday Amy's Momma and Daddy...may you share many many more.

A very happy birthday to your parents--how marvelous they share a special day together as well as their lives. I hope your father is fully recovered now and that they both have a joyous day.

What a sweet story. But we ALL know how those windows got steamed. hee hee.

Happy birthday to your parents! (My hubby and I have the same birth date as well, and like your mom, I also thought it was a line!)

Oh yes! By all means a very happy birthday... happy first date day.... and many many many more years of steamy windows!!!

What a sweet story : ) Happy birthday to both of your parents!

What a wonderful coincidence, happy birthday to both your parents!