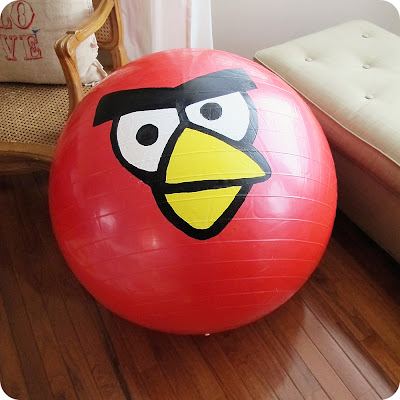 I saw this idea all over Pinterest and instantly knew it was the game for us. We're renting an indoor field for Alfredo's birthday party. The idea is that the children will roll (or toss if they can) this huge ball into a tower which another child builds with boxes. They'll place piggy plushies in amongst the boxes.
I painted the extra huge red ball with an Angry Bird face. (I just noticed in this picture that the placement of the black dots in the eyes is a bit off, giving him a bit of a Crazy Angry Bird expression!) I just used regular craft paint and it worked great...until I decided to paint on some sealer. As the sealer dried, the paint just flaked off. So I started over, repainting with just the craft paint. Hopefully it holds up for the party. 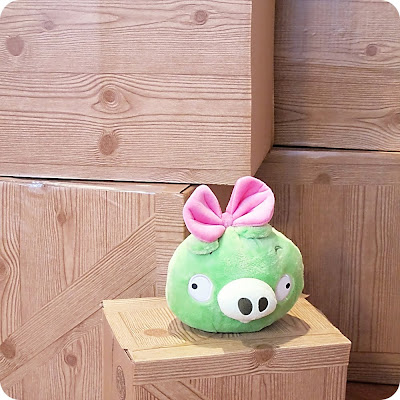 I covered all sorts of boxes with wood grain contact paper (found at the dollar store). 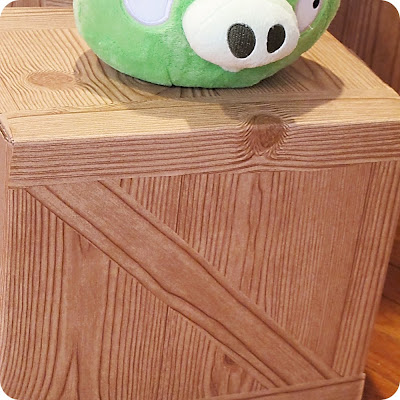 Adding strips of the contact paper to the top and bottom, with the grain in the opposite direction, and adding a strip diagonally really makes the boxes look like crates.
My kitchen is currently filled with these boxes and Alfredo has been testing them out by throwing his Angry Bird plushies at them. If his test is any indication, this game is going to be a big hit!
love, amy at 8:33 AM

What a wonderful talented mama you are... YAY

Adorable! I thought at first it was vinyl cutouts.

Awesome idea!! I know a little five year old (my grandson) who owuld love soemthing like this.

This game will "definitely" be a hit!! Hope the party is great fun!

For all that you do, may God bless you!
What a superrific Mom you are to this little boy.