In the beginning, as he learned about us and as we learned about him we started forming routines. Out of nothing. Silly things, repeated, became our days and formed our beautiful life.

Like this...one morning turning the stereo on for breakfast, repeated the next day and the next. And then I was asking every morning "Shall I play some music?" and he would smile and, with both hands in the air waving back to me, he'd motion the sign we made up for morning music.

Our favorite morning song quickly became "Three Little Birds", originally sung by Bob Marley but performed for us by Elizabeth Mitchell. He knew the song immediately when he heard the first bit and he would get so excited, his little feet kicking in his high chair.

Sometime around breakfast Rich would appear, ready for work. He'd eat his breakfast while we finished ours. And when Rich was ready to leave, we'd walk him to the garage door and wait there as he drove out. This particular routine, paired with the same ritual at night welcoming Rich home as soon as we heard the garage door, became one of the most important things to Baby.

When Rich came home, greeted at the door by the two of us, he took the baby with him to change out of his work clothes while I started dinner. The two of them would make quite a ruckus up there, giggling and hooting and hollaring. It makes me smile to think of the two of them together, having so much fun.

Nearly every single night, Rich took care of the whole bedtime routine. What was at first quite a struggle (he woke up every hour throughout the night after hours of getting him to bed) became, I believe, what had to be the most peaceful going-to-bed hour in all of America.

At 8:00 on the dot every night, we'd watch the opening song of the Backyardigans. Most nights, we'd rewind it and watch it again. And maybe again. We'd all get up and dance and sing. Bathtime was next. And then, all clean and bathed and pajamaed, it was time for a little goodnight bottle and rock-a-bye-babying with me. With a kiss from me, the two of them would go up to the baby's room. They read books and played games. And when the sunshine clock said 8:45, Rich would turn out the light and lay down on the floor. The baby could continue to play but Rich wouldn't play back. Instead, he'd pretend to be really sleepy. After about 5 minutes, but sometimes immediately, the baby would go over to Rich and motion to the bed. "Are you ready to say goodnight?" And he'd nod yes. And then they went to every single thing in the room, all of the wonderful gifts that decorated his walls, and they'd say goodnight. "Goodnight cow jumping over the moon" "Goodnight little boy holding a rabbit" "Goodnight party cupcakes" "Goodnight sunshine" and so on until everyone got a proper tiding, Goodnight Moon style.

And then, like a little miracle, the prince would lie down in his bed, watching Rich until he left the room, and go to sleep.

You could paint all of those days in all those months he was with us with a broad stroke. We did the same sorts of things everyday. We read the same books, sang the same songs, played the same games, watched the same shows, walked the same paths. We learned all about each other, by heart. 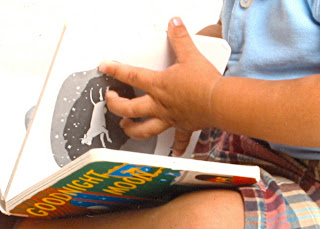 What a lucky baby to have experienced your love. I'm sure he will be forever printed on your hearts.

I am so touched by the amount of love you have in your heart. So many in the world need to be touched by a love like yours. I am sure God brings people into your life everyday that need exactly what you give. Most times we are not even aware of the things we do that are a help to others. I wish you a home with much love, laughter and babies.
Catherine D.

All the best to you and Rich! 2009 is going to be an amazing year for you

sigh. Oh Amy, you paint such a perfect picture with your words. I felt like I was actually there in your sweet house watching the touching bedtime ritual...

My grandson also loves the Backyardigans. He just lights up with a smile whenever he hears it. Now I will picture your Baby Dear when I hear it, too.

Many more blessings are coming to you, dear friend...

Such love. So lucky. I'm certain that no matter whatever else has gone on or will go on in the baby's life, the oasis of love you and Rich created for him will uplift and shape him for always.

Loving is never wasted or lost.

You could very well be the best part of this child's life, honestly. I hope you always know the difference you made, with this little one. You are an angel on earth, truly, and the very best of humanity! God bless you always!!!

What comfort it must have been to Baby to have the repetition, to know his little world was safe and feel so loved. You and Rich such loving, sweet people- just the perfect ones for Baby to heal and grow with. Think of how many lives you have touched with your story of him, how much love you incite. Now I must go give my daughter an extra kiss although she is sound asleep.

That little baby is the luckiest little boy to have (and had) you and Rich in his life. Likewise, I can tell how blessed you feel to have him in your life too. This is the most beautiful love story, Amy. I cannot wait for the next chapter.

I read that book to my own sweet son.
Kisses
I love to read your blog each day

I have a feeling that this love story will only get better and better with each additional chapter. Beautiful!

Some part of him will never forget.

precious memories...
You were all blessed with those moments together.

That might be the most beautiful love letter I have ever read. You are a gifted writer and, more importantly, a loving and generous soul. You had me in tears with your entry on meeting the second sweet baby and yet I was also laughing about the Target shopping spree and the hour-long carseat installation. Thank you for sharing the smiles and tears. Hugs!

What a lovely bedtime routine. I can just picture the three of you. As always, thank you for sharing....

Precious Lord God my Father, I ask you to bless this sweet girl today and her husband. Keep them safe and strong. Give them the wisdom and courage they need to accomplish the tasks You have set before them. Help them to feel Your presence in their lives as they offer their presence in the lives of the little ones you hold so dear. Thank you for letting us see love in others. Thank you, dear Father, for this post. Thank You for creating this lovely lady and for helping her find Rich. Please continue to bless their home. In the name of Jesus Christ, my Rock and my Redeemer, Amen.

My heart is filled with love for you and Rich. Honestly. I dont know how you can believe a person you never met can say that, but I mean it sincerely. Peace be with you always.