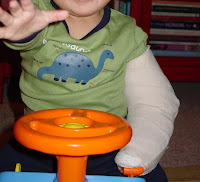 The cast on his arm was incredibly big and heavy. And, in the beginning, those first few weeks, it anchored him to where he sat.

I'd make a little throne for him out of pillows and blankets and sit with him. If he wanted something, I'd get it for him.

The first Saturday morning, Rich fed him breakfast as I read him a story. My eyes were on the page when it happened. His arm slipped out of the cast. His arm, just broken less than a week before, was out of the protection of the cast.

He was so excited to see his arm again and he started waving it about. Rich held the broken arm to the baby's body and shouted at him to stop. He meant to sound forceful but it broke my heart with how mean it sounded.

My mind scrambled to remember what to do in an emergency. I made two calls: One to the emergency line at the agency, one to the hospital in DC. We decided to take him to the local emergency room, less than 5 miles away. We were out the door in less than 10 minutes, maybe closer to 5, dressed and ready to go.

When the doctors looked at the configuration of pins extruding from his arm, they were confused. We could offer no help. They examined the cast and thought they understood how it was fashioned. But they understood wrong. The arm was improperly casted that second time. A permanent mistake.

A few days later, the routine check at the original hospital revealed it. The following day there was emergency surgery to investigate. On that day, a week after we first got the baby, we met his mother.

She seemed impossibly young, more like 14 than 19. The first thing she did when she held her son was check his clothing tags. Then she checked his ears and pronounced them dirty and looked in his mouth and asked the little baby if "they" were brushing his teeth. She ruffled his hair and declared it too long.

She looked at the two of us with fear that resembled disdain.

I was hurt immediately. I learned later to listen for her love when she looked him over to find evidence of lack of care.

That day was one of the hardest days of my life. It would have been even tougher if I hadn't been guided by His grace to say these words to her: "We're not here to take your place. We're here to love your child and give him a safe place to live while you get things worked out." Her heart softened at that.

When the baby came out of surgery we learned that his arm would probably heal "bent" but that they didn't want to rebreak the bone. He was healing quickly and the joint would still probably function well.

A few weeks later, the cast was removed and his little arm was free.

Throughout the months, we became close to his mother. Most days my heart was tender for her and I would easily overlook criticisms. The baby visited with her every week for an hour. After the visits, she would walk with us back to the car and fasten the baby in the carseat. This little bit of unsupervised time when she could do normal motherly things like worrying about covering his head and putting him in his seat, was the only time she was really allowed to be his mother.

The boyfriend (not the baby's father) served time in jail for the baby's broken arm but we were asked to believe that it was an accident. It was a puzzle to us that solved much later when he confessed that he'd hurt the baby on purpose. We still saw this man at the weekly visits. I could never bring myself to look at him again. My understanding could never extend to this man who hurt our baby so badly out of meanness.

There was a list of things the mother needed to do in order to get the baby back. She needed to get a job and a permanent residence. She needed to go through anger management and parenting classes and see a therapist. Maybe there were other things too. But whatever progress was made seemed to be erased by months of standing still.

The father learned of what happened to his baby who lived all the way across the country on his 20th birthday. He remembers the exact time the call came. He asked right away what he could do to get custody of his baby and he did everything he needed to do within a month. In April, the California courts confirmed to the department of family services in Virginia that the father's home was fit for the baby.

In August, when it was clear to the social workers that the mother wasn't doing what she needed to do in a timely fashion, they, for the first time, considered the baby's father's home for placement. I nervously travelled with the social worker to California to meet him.

When we arrived at the house, decorated with homecoming banners and balloons and tears of joy, my heart sighed with relief. I knew from the instant I met the baby's father, who he calls sweetly "Papa", that he would be safe here, loved and secure and happy. My heart could imagine him there.
love, amy at 9:58 AM

I'm so glad that Baby went to his father and not to the woman that gave birth to him. It takes a lot more than giving birth to make a woman a mother and from what it sounds like, she wasn't a mother. I'm glad it all worked out in the end and you and Rich were such a positive place in his life for a time.

Oh, your post made me cry. The Mother sounds very insecure and you sound very mature to endure her insecurity masked by cricisms. Thanks heavens the sweet baby has gone to another loving home.

ugh, these pics of half baby are killing me! i wish i had lived closer to see the whole, amazing package!!!

Amy, you are amazing! I love reading about your journey with little baby.

What an amazing story of love and grace and unselfishness! That precious baby learned love and security and a feeling of safety with you. You have forever changed his life for the better--and he has obviously impacted you forever, too.
Thank you for sharing this story.

...and this beautiful love story continues. I sure hope you're journaling this on paper as well. It truly would make a great book...not just a Baby Love book, but a book for fostering parents as well.

I think I remember you saying a few days ago that you'll be on your way to California soon...I pray that this story has the ending that I'm wishing for...

Your love for this amazing little boy is such a story for all.

Thanks again for sharing it.

I started reading your blog RSS because of crafty inspiration -- but I'm so glad that I'm also getting to hear this back story about you. Everytime you post another episode my eyes well with tears. As a mother, I can't imagine going through what you have with Baby.

I'm really grateful that you're in the blog world -- creating not only amazing crafts but sharing your inspiring stories of strength and compassion.

I am thrilled the little boy went to the Father
Oh how my heart broke and shattered when reading this story.

God bless you and your husband and the childs father
I hope this child can heal body mind and soul.
Love Jeanne

Hi Amy,
I have been following your blog, on and off, for a year or so and had to finally post a comment re: the past 4 days. So sweet and touching! I agree with another's post.....this should be included in a book. Can't wait to hear about your next adventure....maybe more than one child? :o) Take care and have a wonderful trip out to California.(the weather should be perfect for your visit) I am just about 1 1/2 hours north of where you will be.(Lake County)
Lori

I have just started reading your blog recently, and I have to tell you how moved I have been by these posts. What a wonderful and amazing story of love and compassion. I couldn't help but cry when I read that the baby went to his father's home who obviously loves and wants the best for him. Hooray!

Wow i have lurked here for a VERY long time rarely posting but as a person who works closly with children and has a sister who did foster care for years, I just have to say, Bless you for the love and tenderness that your freely give. And for sharing this beautiful story!

I will sleep better tonight knowing baby is in a safe place-safe by your standards must be good.
Your words and heart are so kind to all.

This is heartbreakingly beautiful. It is full of love and compassion for others. We should all follow suit.

Awe Amy, my heart goes out to you. I have been in your shoes 4 times. It is something that no one but a foster mommy can understand.
Now I find myself with three, 3 year olds that we adopted who were our foster children. GOD knows your heart, and he will send you another little person who you can love and protect. Our hearts get broken but they mend. If only our children could.It's not the broken bones, but the psycological damage that lasts. And in the end it is not the children who are lucky to have us, but is us who become the ones blessed and are lucky to have the children. If everyone only knew this secret.
Blessings as your heart mends.
Shelley

But don't make assumptions that such abnormal readings are 'normal in the elderly'; any such abnormalities should still be reported and explored further. Nurse Mates Classic Offer Tradition Excellence And Fashion In this way, you can give the best of your skills to the people who matters most - the patients who will rely on your nursing skills in getting them to feel better and healthier no matter where you are. That is, till they have recovered enough and gained back their strengths to take care of themselves again.

You brought tears to my eyes in this heartwarming story... You ceirtainly have a huge loving heart, you should be so proud of yourself and never stop to fill your heart with love...