There are plenty of stories that I've heard told a million times. I know them by heart. Then there are other lesser known stories. Sometimes I'll remember just a smidgen of it and then I'll have to figure...is this a real story? Did I make it up? Did I dream it? So I call home and ask...

This is one such story. 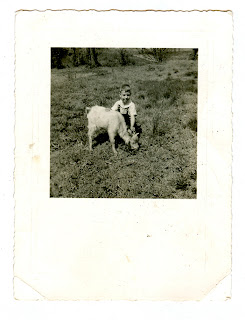 My father is quite a bit younger than his only sister. This difference meant that when he was still fairly young, she was being courted by handsome young men. One such young man brought my father a baby goat. He'd been hunting on Bell Isle in Richmond. When they'd landed the boat, a bunch of goats ran off leaving a 1-day old kid.

My father took it to his grandmother's house (right next door) and they raised it. He had a dog named Spot and pretty soon that goat adopted the same name. When they called "Spot!" the dog would come running and the goat would too. 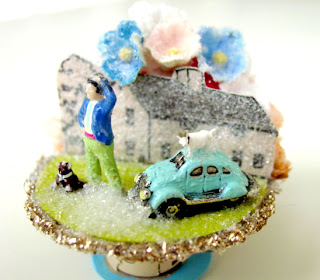 I love this story...it just makes me smile ear to ear to think of my father teaching that dog and goat to slide down the back of a car. I decided to make a little piece to illustrate this story.
love, amy at 10:07 AM

great story and a super sweet piece to commemorate the event!!
just beautiful!!

An awesome story Amy..and I just love the piece you made to honor it - truly colorful and memorable...Enjoy your spring! Have a honey of a day! Marlene :O)

that's a wonderful story, amy. my uncle had a model t ford, and three little boys. they would take the car to the field, one would steer, while the other pressed on the clutch and gas pedal so he could drive it, since he was too short to reach the pedals. don't know how the third one figured in, he was probably riding shotgun....

and my grandma and grandpa had eight kids, and a model t, they would go to from southern illinois kentucky to fish in the river, and somehow they would pile all those kids and a tent in that model t. daddy said that it wouldn't climb a hill, something about the gas not flowing into the carburetor, so everybody would get out and walk up the hill, while grandpa backed the car up the hill. they would have to take tire patch kits with them, because the tires would blow out on the trip, too.

Amy, you are the most wonderful storyteller ever. I don't remember hearing that one. I love the accompanying "illustration," too!

Fabulous story! It makes me smile too, and really, that puzzled male figure is terrific. Thank you for sharing the story, and I'm so glad to hear about your smiles and lovely projects again.

I love the piece you created based on the story. That's so sweet! Great story.

Too funny! And what an adorable little piece to go with the story.

Love the story! Love the miniature vignette that illustrates is so perfectly!

I love it! I'm checking my e-mails before checking in for the night. I haven't had a good bedtime story in a looong time!
Leslie

What a darling piece and a precious story!

And this piece is just so so so sweet!!!