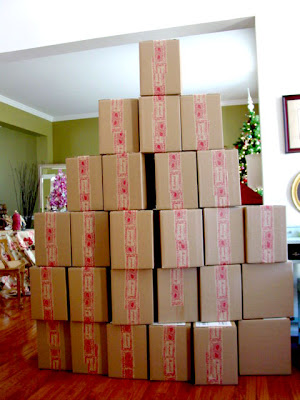 Club Little House packages are on their way...woohoo! Can you believe how many boxes? They reached the ceiling. I can't wait to show you the goodies...won't that be a nice Christmas Eve treat?

The last time he went, circa 1952, he and a friend went for New Year's Eve. His friend got a bit tanked and my father ended up having to carry him (over his shoulder) plus both of their suitcases to the hotel.

I'll tell you about our adventures in the Big Apple when we get back.
love, amy at 9:26 PM

oh my goodness! that is one large stack of packages!

Have fun tomorrow - cannot wait to hear all about it.

WOW...the packages put together somewhat resemble a Christmas Tree...totally awesome...I can't wait to get mine...I'm setting up my doll house tomorrow for the upcoming arrival....from all the blogs and emails - I can see that everyone put a lot into their CLH treats....

Amy you are one SPECIAL GAL...I wish you all the best....thanks for putting everything together...

where have i been, since it hasn't been here.
what a lovely, lovely blog!
kasey

oohhh...have fun! we are seeing the show next week!

I would dearly love to see the Rockettes, especially at Christmas. Is that the only time they perform?

We can hardly wait for our parcel to get here. We have a party planned, of course.