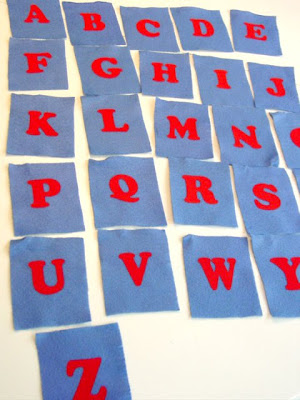 We were in a store not too long ago and Alfredo pointed to a box and said "That box says 'ZOO'!" And indeed, it did.

Since then we've been talking a lot about words and what letters are in them. He even knows how to spell his name.

I made these little felt cards last night. I just cut out the felt (just the cheap craft store stuff) and then ironed on a flocked letter (the kind that's meant to go on tee-shirts). I had wanted to blanket stitch around each card but he said he likes them just like they are.

Just look what started happening just seconds after I shot that first picture... 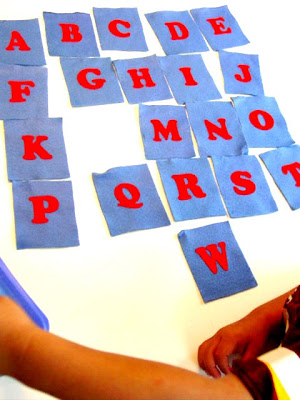 what a great idea!

I love this! What a wonderful gift this would be for a 3 year old as well, especially if you made a cute little case to keep them all in. Looks like I'll be making a set for my son for Christmas!

It looks like the letters to spell "luv" are missing. He must really "luv" it.

Sweet, Amy. Just add a little sugar and it will look like an "Amy original."

This is a great idea! My kindergartner could have fun playing with those, TFS!

stop by my blog and check out the giveaway :)

super idea! as a teacher and Mommy I must try it! Spell his own name!!! Be proud!!!

What a wonderful idea.
Alison